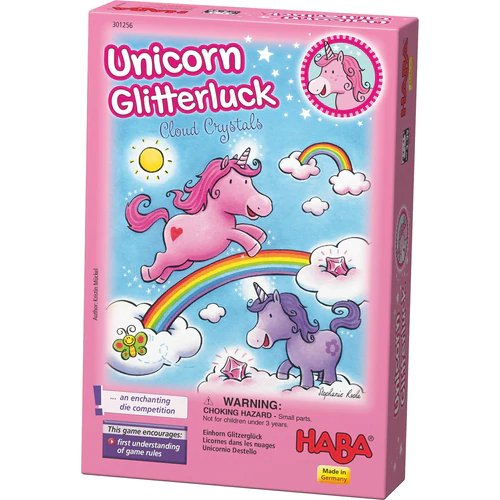 In Unicorns Glitterluck, players become one of the magical unicorns in the game and race from the thundercloud to the sun, trying to collect as many cloud crystals as possible along the way.

To start, all unicorns stand on the thundercloud. On a turn, a player rolls the blue storm die and either moves 1-3 clouds or stands in place eating a muffin, forgetting all about the race, the crystals, and everything else. If you land on a pink cloud, you roll the crystal die and receive 1-3 crystals; if you land on a present, you give someone else a crystal from the reserve; and if you land on the front end of a rainbow, you slide along the path to the next cloud. Whoever reaches the final cloud first claims the four crystals there, then players compare their holdings to see who horned their way to victory.