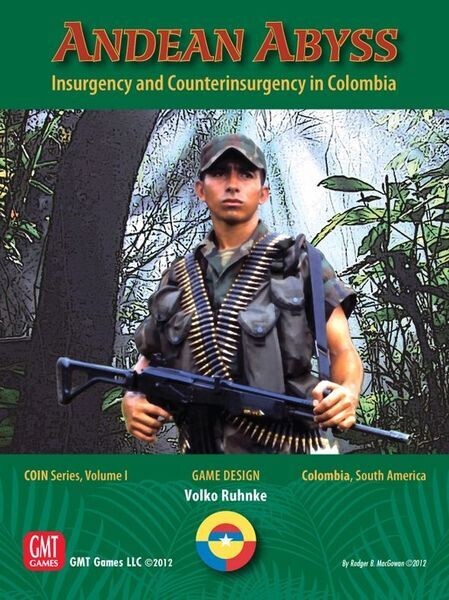 Colombia: Nation at the Edge of Abyss

Colombia in the 1990s hosted one of the world’s last Marxist guerrilla armies, brutal drug lords, and right-wing death squads and appeared close to failing as a state. A decade later, its Marxists had lost their top leaders and rural sanctuary, its big drug bosses were dead or in prison, and its paramilitaries were negotiating demobilization. The Government had extended its writ to most of the countryside, restored its popularity, and improved the economy and respect for human rights.

Andean Abyss takes 1 to 4 players into this multifaceted campaign for control of Colombia: guerrillas and police, kidnapping and drug war, military sweeps, and terror. Each of the four factions deploys distinct capabilities and tactics to influence Colombian affairs and achieve differing goals. Players place and maneuver 160 wooden pieces across a colorful map and exploit event cards that cannot be fully predicted. Accessible mechanics and components put the emphasis on game play, but Andean Abyss also provides an engrossing model of insurgency and counterinsurgency in Colombia—smoothly accounting for population control, lines of communication, terrain, intelligence, foreign aid, sanctuaries, and a host of other political, military, and economic factors.