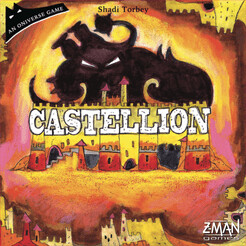 The castle at the center of the Oniverse is under attack. The dream denizens of the oniverse rush to build their castle defense against three monster attacks. Towers allow you to see what is coming. Keeps can help minimize damage. Ranks can reduce the effects of the traitors found inside your walls. Of course, the denizens have special powers of their own to aid in the defense. Will you be able to survive these attacks?

Castellion is a tile-laying game in which you form parts of the castle for defense against monsters. Each turn you flip over a tile and either use its special ability or place it as part of your castle. The more towers and keeps you form, the better your defense against attacks. Ranks prevent traitorous tiles from affecting you fully. When all three monsters have attacked and you still have a base of six tiles, you win.