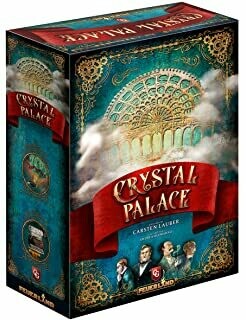 Show off your inventions at the first World's Fair in London 18512-5 players, 120 Minutes

In Crystal Palace, each player represents a nation during the first World’s Fair of 1851 in London. To make sure that your country attracts everyone’s attention, you are going to showcase spectacular inventions and recruit the brightest, most influential minds of your time!

Crystal Palace is a dice-placement game where the players determine the status of their dice at the beginning of each round. The higher the number, the better — but it comes at a price. Over the course of the game, dice are placed on 8 action locations in a competition for the best resources, patents, and brains.

In a world of slightly weird inventions, you will meet people like Phileas Fogg, Levi Strauss, and Amelia Edwards, and invent gadgets such as the Thinking Machine, the Beer Glass Counter, or the Climate Changer.