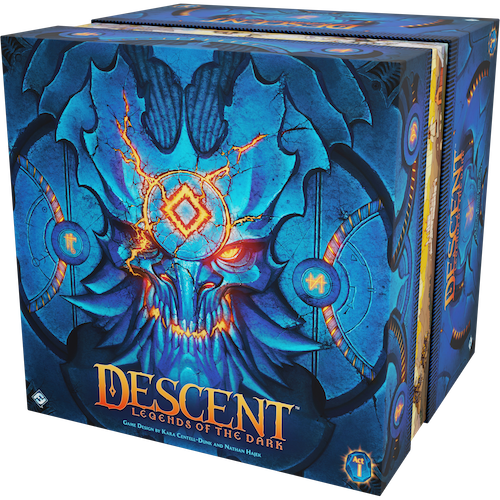 Descent: Legends of the Dark

Forge your own legend as a hero of Terrinoth in Descent: Legends of the Dark, the definitive cooperative dungeon-crawling board game for one to four players!

Across the gripping quests of an unfolding campaign, you and your fellow heroes will venture across the realm, battling terrifying monsters, unlocking new skills, and exploring a wondrous fantasy world. Legends of the Dark features a fully integrated companion app, opening the door for an unforgettable journey as you explore high towers, dismal tombs, dark forests, and the city of Frostgate. With 46 pieces of 3D terrain and 40 striking hero and monster miniatures bringing your game to life, Legends of the Dark is an invitation to adventure that no one will want to miss.

Powered by an integrated free companion app, Descent: Legends of the Dark puts you in the role of a budding hero with their own playstyle and abilities. Together with your unlikely companions, you'll begin an unexpected adventure — an adventure told across the sixteen quests of the "Blood and Flame" campaign. Throughout your campaign, you'll face undead lurking in the mists, demonic barbarians stalking the wilds, and even more terrifying threats. With 46 pieces of 3D terrain and forty hero and monster miniatures to draw you into the game, your greatest adventure is yet before you! Your objectives will change from quest to quest as you follow the overarching story of the campaign.

Core gameplay mechanisms such as combat, fatigue, skills, items, and more have received completely new interpretations with Legends of the Dark, while a new approach to scenario layout and 3D terrain creates striking multi-level scenarios.