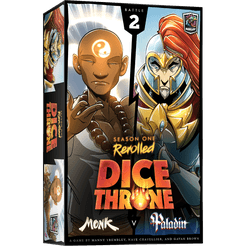 The Monk is a master in the art of Chi. He can channel his ancient energy to absorb incoming attacks from his opponents. He can also use it to unleash a maelstrom of pain. The Monk is not only the calm before the storm, but the storm itself.

The Paladin's sword of righteousness strikes hard and true. Through faithful devotion, he's capable of celestial defense. The Paladin wades into battle assured that the Divine is with him, and that victory is his sovereign right.